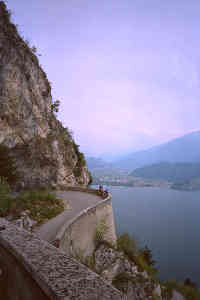 
The map on the left is a detail of the Italy map on the right, of the yellow rectangle southwest of Trento. Tunnels are marked in yellow; the abandoned road mentioned below is marked in purple.

Lake Garda is also in northern Italy, southwest of the Dolomites and in the southern end of the Alps. There is a variety of mountains, none as high as in the central Alps but all challenging to ride, and more accessible. We stayed in Riva del Garda, a town at the northwestern tip of Lake Garda. The Lira was weak at the time, so we went to the best hotel of Riva (the Hotel du lac et du parc) and rented a bungalow in a park at the edge of the lake.

There are two major roads out of Riva, towards Monte Brione to the east, and south towards Monte Tremalzo and others. Monte Brione is good for short but difficult tours; this hill is roughly elliptic, with the west side nearly on level with the lake and the east end sloping up and then dropping sharply. It looks like a large cylinder buried at an angle. There is a Worldcup trail along the steep east edge and plenty of single trails. A road leads up and ends at a large bunker near the top. Monte Brione was crowded with mountainbikers when we were there, it has terrain for everybody. 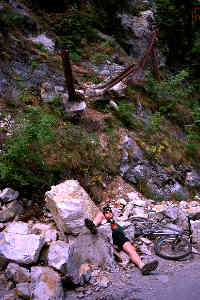 The longer and more challenging rides, including the one I will focus on in this page, starts to the south of Riva. A road leads south along the edge of the lake. Shortly after the city limits, we turned right onto an abandoned and closed road; it looks like a parking lot. There are many tunnels along this road, and we had to lift our bicycles over a gate at the entrance to the first (in summer 1995, a fence has been installed and was promptly destroyed; in 2001 parts of the tunnels collapsed and the road has become inaccessible). Abandoned means that the tunnels are nearly unlighted but ridable. The picture at the right shows one of the reasons why the road was abandoned: large boulders slid down the hill and broke through the large steel reinforcement bars visible in the center. The picture proves that the damage was caused by a little misstep of my friend posing between the boulders; he never crashes or when he does he causes millions in property damage :-)

The picture at the top of this page shows the view from the abandoned road as it switches back and forth up the hill. Parts of Riva can be seen in the center. The road is very scenic with many views over Lake Garda, and has absolutely no traffic other than other cyclists, some of whom even pay attention to other cyclists going the other way.

The abandoned road ends at a regular road, near a tunnel entrance whose ventilation can be heard from a kilometer off. There is much traffic on the way to Lago di Ledro. There are two ways to Monte Tremalzo here: a short one by following a switchback around a bad restaurant at a parking lot just before the lake, or going straight alongside the lake, through Bezacca and Tiarno, and turning left near Laghetto d'Ampola. The first climbs Monte Tremalzo from the north, the second from the west. We did both, on different days. The second has more to offer, but also includes more riding on roads with car traffic. 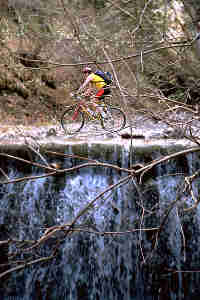 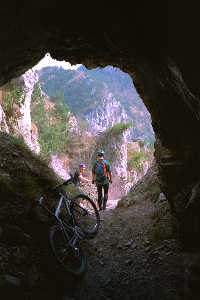 In April 1995, there was still snow on Monte Tremalzo. The first stretch of our climb from the west (first route) was on roads, but we turned onto off-road trails whenever possible and eventually left the road completely. The picture on the far left shows me crossing a shallow creek with a waterfall. Well, actually I had to repeat the performance to have the picture taken.

There are many trails on Monte Tremalzo, more than I can list in my map; we used a KOMPASS map, 1:35000. We couldn't go all the way to the top because of the snow, and so used narrow trails skirting the highest peaks to the north. There are two tunnels along this path, roughly hewn into the rock and sometimes quite narrow and low. The picture at the right shows the exit from the second tunnel directly leading down a narrow single trail. After a while, this path merges with the other route to climb Monte Tremalzo, the one that went directly south before Lago di Ledro. 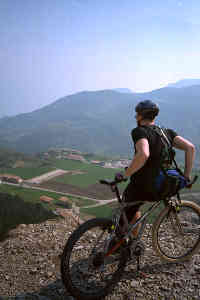 Most of the trails on Monte Tremalzo reach an elevation of about 1800 meters. Lake Garda is at 230 meters. There are frequent small climbs and dips, and many are rocky or on loose gravel to make life interesting for mountainbikers. Too interesting for me, sometimes, I was always better at climbing than descending...

There are several different routes down Monte Tremalzo. The picture at the right shows a view after a bend in a moderately steep forest path, with a view over one of the valleys to the east of Monte Tremalzo. The trouble with descending too far south is that the only way back to Riva is the busy road along the edge of Lake Garda. Since there are numerous small tunnels on this road, a taillight or an LED flasher are essential. Italian drivers are not known for their careful slow speeds.

At another occasion, we rode down a trail that was marked with a dashed line on the map (dotted in the map in this page), meaning ``steep hiking trail, mostly marked''. We thought this was a competition trail, but I don't believe it. It was so steep and dangerous that we had to carry the bicycles much of the time, or detour when possible. Generally, when a map of the Alps uses a special pattern to denote ``steep'' or ``difficult'', they really mean it. 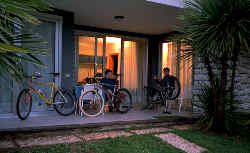 Here is a picture of out bungalow in Riva. The really nice thing about a bungalow is that it's easy to bring the bicycles in without any trouble and that there is a front porch for repairs. Serious rides in a place like Monte Tremalzo will inevitably cause minor damage to the bikes (in our case our Master Bicycle Part Destroyer totalled an AMP suspension fork), and the bicyle will need cleaning. Not that we care much about a sparkling clean frame, but chains and bearings need lubrication. I don't know how we would have managed in a small room on the fifth floor of some regular hotel.