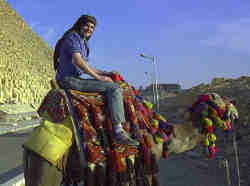 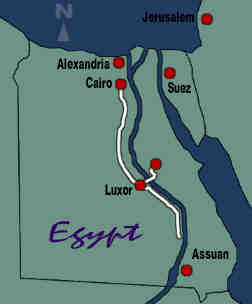 First, this was not a bicycle tour. It could probably be done by bicycle but I used trains, boats, and buses. And camels, of course. My excuse to put it here that I rented a bicycle in Luxor and rode through the desert to the Valley of the Kings. More about that later. 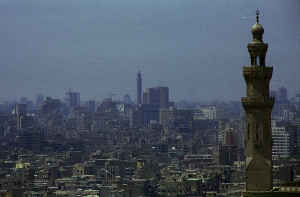 The tour began and ended in Cairo, because Cairo has an international airport. Cairo is an amazing city, crawling with people and so much buzzing with chaos that it's a miracle that it works at all. Traffic follows different rules than in other cities. Where else could you park your car on the double line in the middle of a busy road, walk up to a policeman, give him, hm, a small token of appreciation and ask him to watch out for your car? Taxicabs are also unusual because the drivers regret having missed their true calling (kamikaze pilot in 1945) and now make up for it by their driving style and fare price schedules that border on extortion. I had the pleasure of riding with an Arab friend a few times and watch him haggle the price down to virtually nothing. 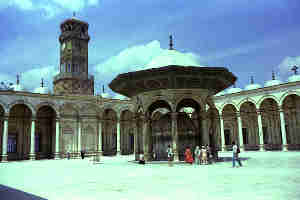 Money in Egypt also follows different rules. There are very high prices for tourists and extremely low prices for everybody else. A tourist is defined as a hapless victim who stays in one of the western-style hotels and travels on those Agatha-Christie-style Nile riverboats. For example, a soldier makes about 10 Egyptian pounds per month, which in 1988 was the equivalent of three bus rides in Germany. I actually bought a pita bread for one-quarter US cent in a small village. The entire three-week trip cost DM 300 (US$ 210 by 1995 exchange rates) plus the flight! I doubt the value of the Egyptian pound has increased since then.

Ok, so I was king with my German bank account, as long as I stayed away from the tourist traps. This meant staying in the Cairo youth hostel, scenically located in a side street close to the Nile river. Obviously, one of the first points on my agenda were the pyramids of Giza, which postcards invariably show in the middle of the desert but which are actually right at the edge of the suburb of Giza. They close early there, but we managed to ``get lost'' and watch the sundown over the pyramids. It's an eerie feeling, watching those buildings that were built over 4500 years ago. The interior of the pyramids is unspectacular, some large corridors and empty rooms, all looted millenia ago.

By the way, the two small irregularities on the right side of the horizon between the pyramids in the above image are camels, to give you a sense of perspective. These pyramids are huge. They look smooth but only from the distance, they are really piles of stones about 1.5 meters (5 feet) tall. The camel picture at the top of this page gives an idea, it was taken in front of the Cheops pyramid.

LUXOR AND THE VALLEY OF THE KINGS

We (that is, me and someone I met at the youth hostel, I always meet interesting people in youth hostels) then took the train to Luxor. A perfectly normal train ride, except that we went to the huge expense of spending nearly ten pounds on a first class ticket. This meant an entire railroad car with only 40 huge seats, all wooden with plush but slightly faded red velvet upholstery, with enough space between the seats to stretch out in our sleeping bags. Pure luxury, I felt like Hercule Poirot. This was in stark contrast to third class, which was naked cars with benches along the sides, and hooks in the ceiling to hang the cages with live chickens on. I wish I had made a picture. 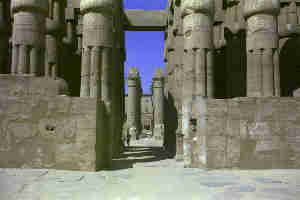 After about 800 km (all for half the price of a pocket book, remember) we arrived in Luxor. When they aren't playing Aida, Luxor is most well-known for the temples of Karnak, a huge temple complex. I wish I could relate the sheer size of the buildings. Each of the four or five layers of stone blocks in front is as tall as a man, and there are many more columns in this hall than visible in the picture, and this is just one of the many temples of the complex. One of the James Bond movies used this temple.

Not all of the temple is open to the public, other areas are closed and guarded by local police. If you approach one of those places, the guard will sternly warn you off by saying ``Bakshish''. This is the magic word that keeps Egypt operating. It means that you are supposed to discreetly slip him a few pounds. Not too much, or he will be impossible to get rid of, trying to play the tour guide hoping that there will be more where that came from. Nobody is trying to hide this, bribery is part of daily life.

Luxor is right on the edge of the Nile. They have a large western hotel but we stayed in a small place with three guest rooms operated by an Egyptian family. Not only did we avoid the excessive room prices at the regular hotel, we also got a chance to see the life of that family. We got those huge mosquito-net covered beds, in small rooms with doors with wooden blinds leading to small balconies. In the morning, we were woken up by the muezzin calling from the local mosque. I don't know what these tourists are thinking who book complete tours, stay in hotels that are absolutely identical all over the world, but for me this immersion in the life of the locals is the essence of travelling. 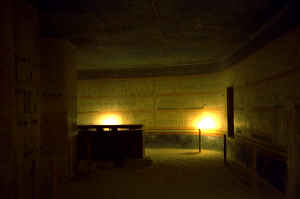 There is a ferryboat providing transportation from Luxor to Thebes, capital of Egypt for a long time, right on the other side of the river. We rented bicycles in Luxor and rode from Thebes to the Valley of the Kings, through the desert. There are many tombs there, some looted a long time ago. Others got broken into but the looters only found what they are supposed to find and missed the entrance to the real tomb, skillfully hidden by the builders. The picture shows one of these. We entered through a bare upper chamber, through a hole in a corner with a makeshift ladder into the real burial chamber, with several rooms with incredibly colorful undamaged paintings all over the walls and ceilings. I believe they are no longer open to the public, not even after liberal application of bakshish. There are no mummies in the tombs, by the way, they and all the other artifacts have been taken to museums. The largest of these museums is the Egyptian museum in Cairo, but museums in London and Berlin also have large collections.

The situation was slightly complicated by the fact that we were there during the month of Ramadan. During Ramadan, no muslim may eat or drink while the sun is up. I think that one should not violate local customs, which for us meant no food or drink either, and wearing shorts or going topless is right out too. Unless you wish to be followed by screaming hordes of children denouncing you for breaking their sacred laws. Of course, Ramadan does not mean that muslims may not sell Coca-Cola to nonbelievers... I hate Coca-Cola, but there is something about the desert climate that made me make an exception here. Not in public, of course.

BY BOAT ON THE NILE 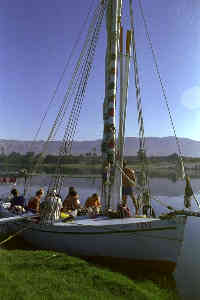 We met other people in Luxor we knew from Cairo, and decided to rent a felucca. A felucca is a small wooden boat with a triangular sail. There were ten people on our felucca, which was a bit tight at night (sardine principle, one with his head to starboard, the next with his head to port, and so on), but the atmosphere was great. We had a Nubian captain and a cook with nearly black skins who spoke broken English. We spent over a week on that boat, visiting many of the small villages that line the Nile. Almost all of the population of Egypt lives along the Nile, because most of the rest is desert.

Some of these villages have ancient temples that few tourists find, and others have markets and bazaars where we bought groceries. Egyptians don't eat much meat at all. Our Nubian cook managed to prepare incredibly tasty and spicy meals from the vegetables and spices we bought. I was a bit sceptical about the tea though, because he took water from the Nile, and I had seen buffalos, uh, go to the restroom in the water. Oh well, early in the morning when the light mist dissipates in the morning sun, with the boat slowly rocking in the Nile, those buffalos were indispensable for the atmosphere. 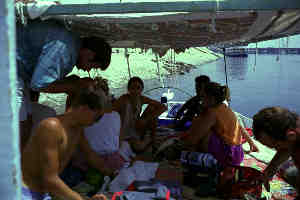 Here is our felucca again, with its sunroof. The boat wasn't nearly as plastic-looking as the previous picture suggests. You can see one of the aforementioned Agatha Christie boats in the background. I don't think these people had a clue of what they were missing!

Actually we planned to go upstream to Abu Simbel near the Sudanese border, but we didn't make it. It was probably a doomed idea from the beginning despite the claims to the contrary by the captain, but it does take a long time to go upstream by boat. Anyway, when my return flight day drew nearer I had to split and go back to Cairo by bus and train. The bus, of course, was right in character, with bags and live animals in cages strapped on top and filled with people. Not a tourist in sight, they were probably watching TV on their boats.

This was my first tour to Egypt. Click here to read a report of the second one in 2006.

There have been many reports on terrorist attacks in Egypt recently. I don't think that would stop me from going there, because the news always exaggerate enormously. Terrorism in the seventies in Europe was hugely blown out of proportion in the news, we hurt more people in traffic per hour than all terrorist attacks combined. Same thing for the 1989 earthquake in California, the reports here implied that California has just fallen into the sea. It's your decision, of course.